A Hell of a Band

This post is about a song by The Right­eous Broth­ers. I don’t know if they real­ly were right­eous, but I do know they weren’t broth­ers, so I guess I report, you decide. If you’re the churl­ish tl;dr type who can’t wait till the end of this post to hear the song, it’s down at the bot­tom, but if you skip the whole post like that you can’t be my friend or come up in my tree fort anymore.

If you’re under 45, chances are the only time you’ve been exposed to the Right­eous Broth­ers was in the movie Ghost, or pos­si­bly in Top Gun.

In Ghost, The Right­eous Broth­ers’ “Unchained Melody” plays while Demi Moore is sculpt­ing a vozz, and Patrick Swayze sits down behind her and the vozz gets ruined and they get slimy wet clay all over themselves.

In Top Gun, The Right­eous Broth­ers’ “You’ve Lost That Lovin’ Feel­ing” plays on a juke­box once or twice, along with the fight­er pilots singing “Great Balls of Fire” and Ken­ny Log­gins singing “Dan­ger Zone” and the pilots play­ing half-naked vol­ley­ball and fly­ing around real­ly fast and in gen­er­al slosh­ing buck­ets of sweat and testos­terone off the screen and all over the audience.

The Par­tridge Fam­i­ly was a TV show about a fic­tion­al musi­cal fam­i­ly loose­ly based on the real musi­cal fam­i­ly The Cowsills, who not only had a hit with the song “Hair,” from the musi­cal with the same name, but also got me very con­fused when was a kid, because it seemed to me that if a cow has sills, it should also have windows. 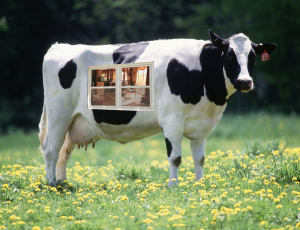 So any­way, The Par­tridge Fam­i­ly was nei­ther a fam­i­ly nor a band. It was a TV show with a bunch of actors pre­tend­ing to be a band that didn’t exist, except they did kind of exist because you could go to Wool­co or Sears and buy 45 RPM sin­gles labeled The Par­tridge Fam­i­ly, even though the songs were per­formed by David Cas­sidy with a band of gener­ic musi­cians, which con­spic­u­ous­ly lacked a 10-year-old bassist and a 7‑year-old drummer.

My dad hat­ed The Par­tridge Fam­i­ly. He also hat­ed The Jack­son 5, The Osmond Broth­ers, The Car­pen­ters, the Mon­kees, The Right­eous Broth­ers, and Bob­by Sher­man (who, on a side note, orig­i­nal­ly leased the cus­tom-built 747 that Led Zep­pelin used and was seen in the 1976 film The Song Remains the Same, which was about a Led Zep­pelin con­cert in New York City in 1973).

Dad did not hate any of these musi­cians for their music. As far as he was con­cerned, they were just noise. Dad was like Bob’s wife, who worked at Bob’s Coun­try Bunker in The Blues Broth­ers and who, when asked about what kind of music she liked, replied, “Both kinds: coun­try AND western!”

What Dad hat­ed was their faces. He also hat­ed 3M, the com­pa­ny that pro­duced Scotch Tape, and the mag­a­zine Tiger Beat. 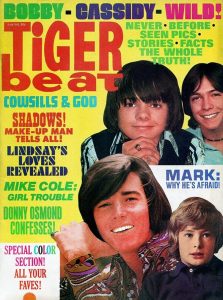 Tiger Beat pro­filed young musi­cians and actors as long as they were safe-look­ing rel­a­tive­ly short-haired guys (which is why Led Zep­pelin and Alice Coop­er and The Doors nev­er appeared therein).

Scotch Tape sold the tape my sis­ters used when they scis­sored Tiger Beat into con­fet­ti once a month in order to tape head­shots of that month’s dreami­est teen idols all over their bed­room doors, then rip them all off to tape up the head shots from the next month’s issue, which was rapid­ly strip­ping the fin­ish off the doors.

After school one day my mom asked me to go fetch her cig­a­rettes from her room. The cig­a­rettes were on her night­stand; as I picked them up I glanced at a 45 RPM sin­gle next to the cig­a­rettes. It was a sin­gle by The Par­tridge Fam­i­ly titled “One Night Stand.”

I was 9 and not too sharp on the sub­tler nuances of gram­mar and spelling, so when I saw the sin­gle “One Night Stand” on the night­stand, my first thought was Why would any­one sing a song about a piece of fur­ni­ture? 1

So I grabbed the sin­gle, along with the cig­a­rettes, and asked Mom why The Par­tridge Fam­i­ly had a song about a night­stand, which led to an awk­ward, unsat­is­fy­ing expla­na­tion about how a one night stand was when two peo­ple went to go see a movie togeth­er, but then decid­ed not to see any more movies together.

I nev­er did find out why the sin­gle was on Mom’s night stand.

Fast for­ward two years to the sum­mer of ’74. I was 11 and had vague­ly fig­ured out that a one night stand was a very brief romance, and the rea­son the guy and the girl didn’t want to see any more movies togeth­er was because they didn’t like kiss­ing. Pre­pu­bes­cent me under­stood that, because girls were yucky and kiss­ing was stupid.

We were vaca­tion­ing in Galve­ston, Texas, that sum­mer. The Right­eous Broth­ers had just released a song titled “Rock and Roll Heav­en,” and it was get­ting heavy air­play, at least once an hour all the way there, all day every day we were there, and all the way back.

I did­n’t get most of the ref­er­ences oth­er than Jim Croce and Janis Joplin; “Bad Bad Leroy Brown” had been a big hit the pre­vi­ous year. Joplin had appeared on the Tom Jones vari­ety show, which my mom loved (and I snick­er a lit­tle bit now, but at least she did­n’t throw panties at the TV).2

I also rec­og­nized the ref­er­ence to “Light My Fire,” but I’d seen Antho­ny New­ley singing it on a vari­ety show and I thought it was his song.

I loved “Rock and Roll Heav­en” on its own mer­its; still do. But what made it so cool at the time was the chorus:

If you believe in forever

Then life is just a one night stand.

If there’s a rock and roll heaven

Well you know they got a hell of a band!

Part of it was the puerile thrill of some­one on the radio singing the word “hell,” which was still mild­ly naughty, but what made the biggest impres­sion was that for the first time I can remem­ber, I con­nect­ed with lyrics that used a sim­i­le to touch on a much deep­er truth: Com­pared to eter­ni­ty, life is short. Blink-and-you’ll-miss-it short. And maybe some­day those who touched our lives but have since passed on—well, maybe some­day we’ll see them again. And in the mean­time we can remem­ber them by cel­e­brat­ing their lives and legacies.

MTV didn’t exist in 1974, but thanks to Mid­night Spe­cial and Amer­i­can Band­stand, you could occa­sion­al­ly see a music video or live per­for­mance of hit songs.3

I didn’t know “Rock and Roll Heav­en” had a music video until the oth­er day, when I stum­bled across it on YouTube. And just like that, a song I hadn’t thought of for more than 40 years was back, with all the influ­ence and emo­tion it gen­er­at­ed back then.

So I now present to you, all the way back from 1974, The Right­eous Broth­ers’ “Rock and Roll Heaven.”

Time trav­el can be bru­tal, though: In this case, try not to think about how unbut­toned shirts and bell-bot­tomed leisure suits and lapels wider than your shoul­ders were once unbear­ably cool.

Dur­ing our ’74 sum­mer vaca­tion, Dad found “Rock and Roll Heav­en” annoy­ing, even though The Right­eous Broth­ers weren’t Tiger Beat mate­r­i­al, and he kept tun­ing to some­thing else when it came on. I would yell, “Turn it back on! I love that song!” from the back seat.

Made him grouchy but it was worth it.

« My Dad’s Hands
Robert Plant and the Commando Lunge »